During our initial implementation of our pilot project we did not include Edgesight deployment in our scope of work.  After using the XenDesktop, XenApp solution for some time I decided it was time for some measurable metrics to answer some questions that are key to our pilot.  Those questions included:

After installing and configuring Edgesight with a real-time configuration for the XenApp servers, I checked the results and was pleasantly happy with the results.  I turned on the real time monitor and immediately saw something i should check.  Fortunately, there is a ‘troubleshoot’ button to the left of the device name in the real time config monitor. 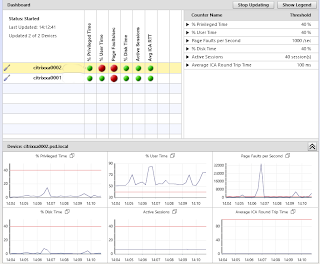 The process was quickly identified after clicking the ‘troubleshoot’ button to the left of the server name in the image above.  As you see below, Acrord32 was taking 50% CPU.  This particular user’s session was in a disconnected state. 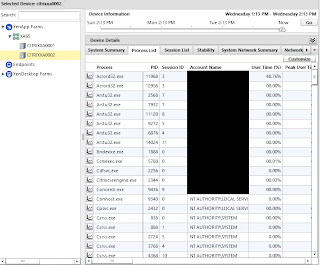 In addition to performance monitoring, Edgesight offers alerting on the event log, which is quite useful. 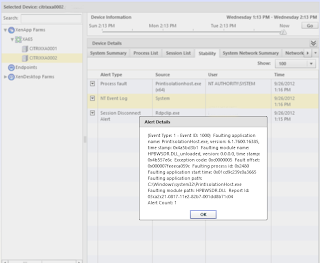 So far I am pleased with the data that I’ve gathered and how it has already been put to use, but the lingering question of how much of an IO cost is Edgesight remains.  When I get that measured, I will be sure to post my results!