Have you ever completely blown off some really good advice only to feel silly about doing so later?  I know the folks in #Citrix on Freenode are some very smart people, but it seems when I was new there I didn’t pay enough attention to their words.

‘Not me!’ I foolishly thought.  ‘Everything is working great!‘.  Perhaps so – though at the time the extent of the user base was basically me, minus an occasional remote desktop XenApp user.  It continued to work great as people began to explore this whole “VDI Pilot” ‘thing’ that we had begun to deploy.  It wasn’t until the rubber met the road and we expanded it to two sites, with thin clients completely replacing library, classroom, and computer lab stations did things start to become apparent.  You know, when users started actually using it.
One of my more accomplished use cases last May was the rather creative streamed application profiling of an old version of Accelerated Reader, a program that quizzes students on books they’ve read and awards points to track reading progress throughout the school year.  Our version was so old that it wasn’t officially supported on Windows 7 (or 2008 R2 for that matter) but that didn’t stop me.  Over the summer, however, administration decided it would be wise to finally upgrade to a new hosted web version.  Requirements? Pfht – flash, no problem.  We’ve got flash!
Well, as it turns out, this is a case of those, “Gee, I really should have set aside to test that” cases.  It didn’t take long to figure out that flash redirection had to be disabled for this domain, but to my surprise a second ‘connection’ issue cropped up after the site was using server side rendering.  After some troubleshooting, it was clear that the issue was only occurring with AppData (roaming) redirection enabled.  As it turns out, there are a lot of other people with similar issues with flash and appdata direction.
So, how do we go about disabling flash redirection for a specific URL?  Simple!  Use Citrix Policies.  Lets take a look in a group policy (Note: you must have the Citrix Group Policy extensions installed – use the XenApp installer or run Group Policy Management Console /editor from a XenApp or XenDesktop server). 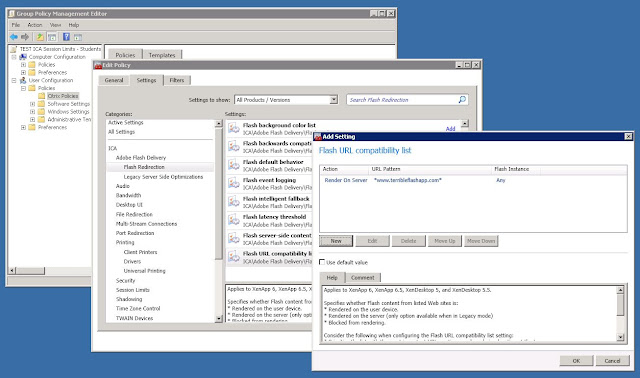